Sceneca Residence, an upcoming development on the 99-year leasehold Tanah Merah Kechil Link site, will be a mixed-use development. It comprises commercial space of about 21,528 sqft on the ground floor and about 265 residential units. It will be jointly developed by MCC Land (Singapore), The Place Holdings, and Ekovest Development (S).

Sceneca Residence is nearby Changi Business Park, Changi Airport and the exciting future developments in Changi East. It is also a straight train ride to major job centres in Raffles Place and Jurong East on the EWL. Currently, the Tanah Merah MRT station is one stop from the Expo MRT interchange station which is also linked to the Downtown Line. The Expo station will also be connected to the Thomson-East Coast Line (TEL) which will further enhance the accessibility to the city and northern parts of Singapore when the TEL is ready from 2024. 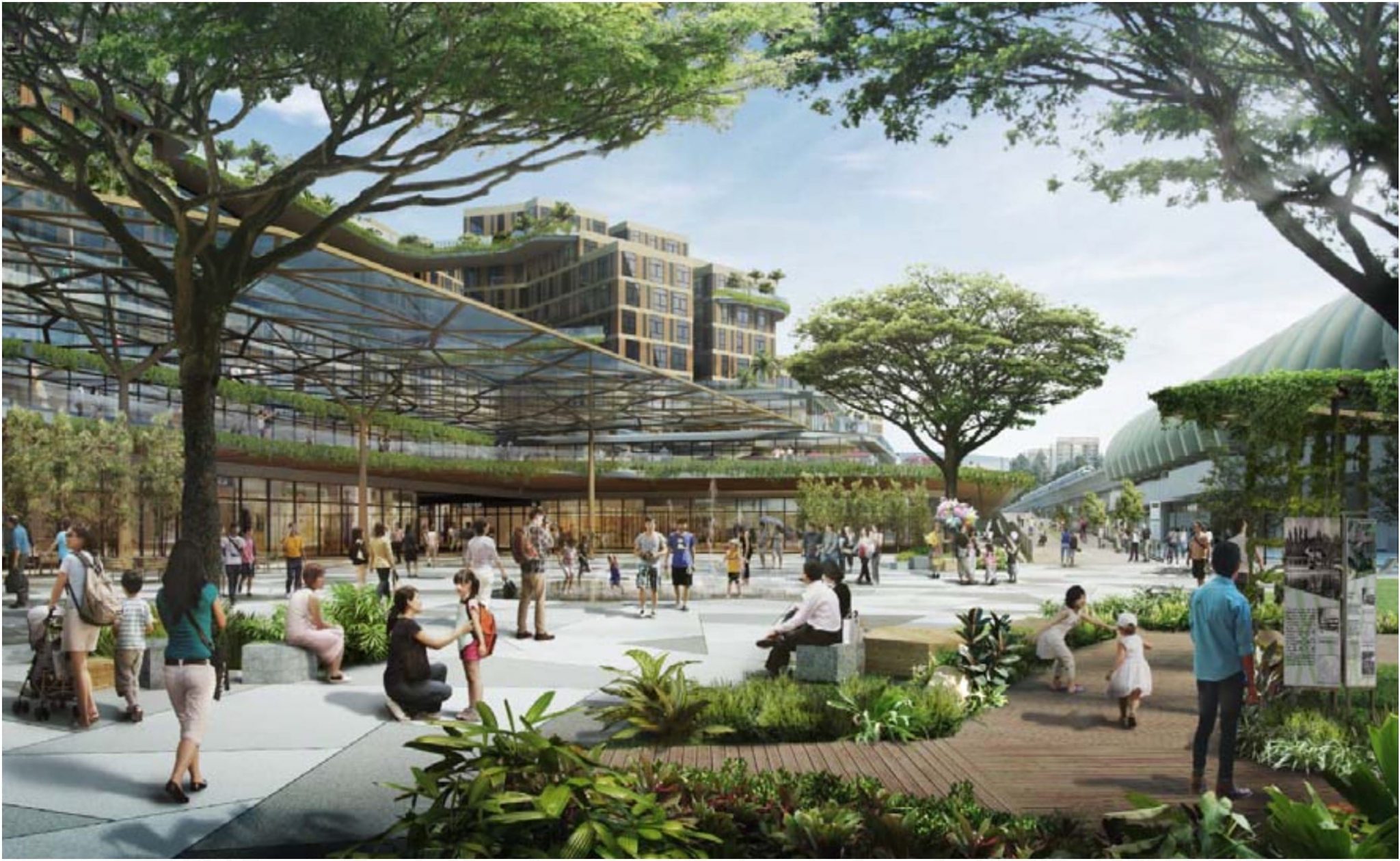 Through a joint development, MCC Land, Ekovest Developments, and The Place Holdings will develop Sceneca Residence. The developers can harness their resources, experts and industry experience to bring out the best of the Sceneca Residence and take advantage of its strategic location right next to Tanah Merah MRT station.

The city fringe location in Outside Central Region (OCR) means that the upcoming development will enjoy steady demand. The supply here is low, which has helped to stabilise the prices. Besides, featuring commercial units makes the residence more appealing since nearby amenities are limited.

And, with an excellent transport system, the future residents of Sceneca Residence will meet their daily needs easily.

Register with us today via the form below to get the latest updates, special pre-launch prices, and many more! Tanah Merah (Chinese: 丹那美拉 Tamil: தானா மேரா), is a geographical region located along the south-eastern coast of the East Region of Singapore. Although its boundaries aren't exactly clear, it is often widely accepted that term "Tanah Merah", is used to refer to the southern coast of present-day Bedok, Tampines, Changi and Changi Bay.

The name "Tanah Merah" appears in the seventeenth century (1604) map by Manuel Godinho de Erédia on Singapore, written as Tana Mera. This place name is likely to have been an important reference point for the orang laut (sea people) in their activities in the region.

Old maps also show the existence of Tanah Merah Road as early as the 1840s, which stretched from Kallang River to Changi Point. Now, the road ran mostly along the original route but was renamed Geylang Road, Changi Road and Upper Changi Road, with a section between Siglap Road and Tanah Merah Kechil Road lost after the hills of Chai Chee and Bedok were levelled, and another short section lost under Changi Airport. Later, the road leading to "Large Red Cliff" was named "Tanah Merah Besar Road" while the other was named "Tanah Merah Kechil Road". Besar means "large" while Kechil means "little" in Malay.

The presence of weathered lateritic soil provided the red-orange colouring of the area that led to its name even before Raffles' founding of Singapore. The exposed red lateritic soils were probably visible to many passing boats and hence the "landmark" was captured in early maps of Singapore. 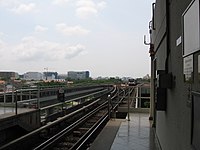 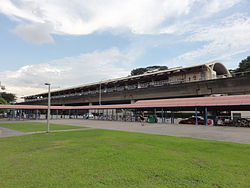 Exterior of Tanah Merah MRT station, located at the epicenter of the region

Tanah Merah's suburbs has a number of available transport routes in and out of the area, making its accessibility little cause for concern. New Upper Changi Road, which runs through the residential area of Tanah Merah, offers a number of bus services, some of which travel long distances.

Raised above the middle of New Upper Changi Road is Tanah Merah MRT station, a railway station which also operates as an interchange for passengers who wish to travel by train to Singapore Expo, Changi Business Park and Singapore Changi Airport. Its neighbouring stations are Expo MRT station, Bedok MRT station and Simei MRT station.

The bus stops next to Tanah Merah MRT station are usual pick-up and drop-off points for buses which take passengers to nearby places such as National Service Resort & Country Club and Changi Naval Base.

By sea, it is also home to the Tanah Merah Ferry Terminal with regular service to the Indonesian Riau Islands, as well as Sebana Cove and Tanjung Pengelih in Malaysia. 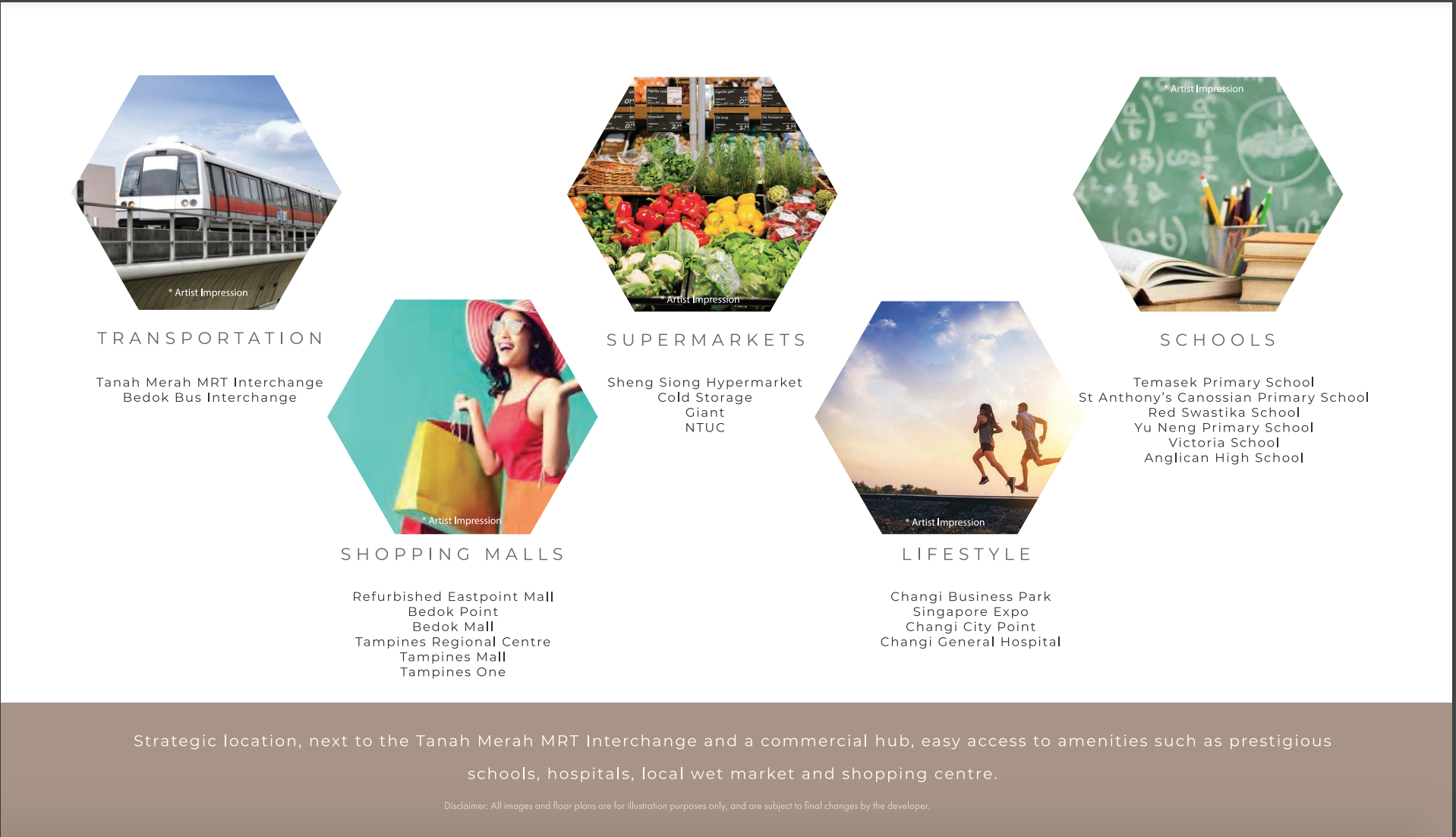 Being home to four recreational clubs, Tanah Merah offers a vast spectrum of recreational choices such as golfing, tennis, bowling, swimming and water sports amongst other activities.

Residents of Tanah Merah also enjoy using the Bedok Park Connector – which is a route that connects Bedok Reservoir to East Coast Parkway. It spans several kilometres long, and runs along a canal/waterway. Residents often use the connector for daily walks or runs. Some also use it for roller blading, or cycling, whilst some even fish, although is not strictly legal. Many are also spotted walking their dogs at these areas.

There are many dining options in Tanah Merah. This includes the restaurants located in East Village, hawker center in The Bedok Marketplace and restaurants in the shop houses along Jalan Pari Burong.

The following is the list of schools in Bedok as of March 2020:

As of 2020, 10 major hawker centres are serving highly affordable local street food. They are: